By: AI Image Enlarger From Hong Kong
Based on 1 Vote
Visit Website

One of the worst headaches we face in online media postings, especially for photos, is that versions from old devices have horrible quality compared to modern cameras. Due to this, we have seen fuzzy family photos, bad camera shots, and whatnot, especially in those millennial eras.

At least most modern cameras are capable of taking decent quality photos and are much richer than their older counterparts. But then, we still have lots of memories in those fuzzy pics!

Also, how am I going to use my old memes stock for modern devices? They sure are going to look bad as per modern standards. What can we do with them? Even modern photos need quality corrections.

Let us think for a while. Can we try to improve the pixel quality? Maybe edit the image and then try to make it of decent quality! We can do that, but that’ll need a badass level of knowledge in image editing, and that my friend is not possible for most people.

So, for that, we can utilize some sophisticated tools that help us add some quality to the pictures. These tools use complex AI technology to enhance the quality of such images.

So, why wait so much?

The market is flooded with exclusive products called Image Enlargers. These are a type of image-enhancing tools that are used to increase the quality of the pics and even help to enlarge them.

Many times, the images we own are of the shallow resolution, and hence zooming them will tear the pixels, giving you a blurry view.

After that, it has got a significant audience at its disposal. The program uses a sophisticated AI learning technique called SRCNN, i.e., Super-Resolution Convolutional Neural Network. 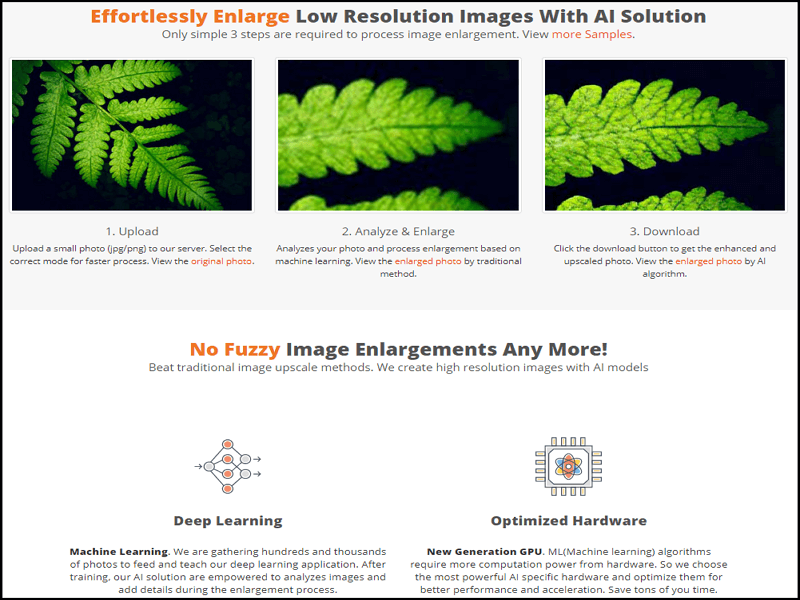 Huff! The name itself is dreadful. Forget the part where we said we are going to do it manually! All in all, it is part of a machine learning program that collects tons of data from many photos.

The process will be explained in short later on. For now, AI Image Enlarger works like a charm, and that’s the first thing we can say in the review.

Moving forward, we choose to review the UI of the software as well as try to assess what type of images and what quality of poor images it can work with.

Before jumping into the detailed step by step process of enlarging images with AI Image Enlarger, we need to learn something about the leading AI technology that empowers it.

As we all know, the concept of AI, one thing we all know is that it is capable of learning on its own. A similar, but an advanced version called SRCNN is used for the process of image enlargement here.

Hold on to your seats as this method is going to fry some brains! 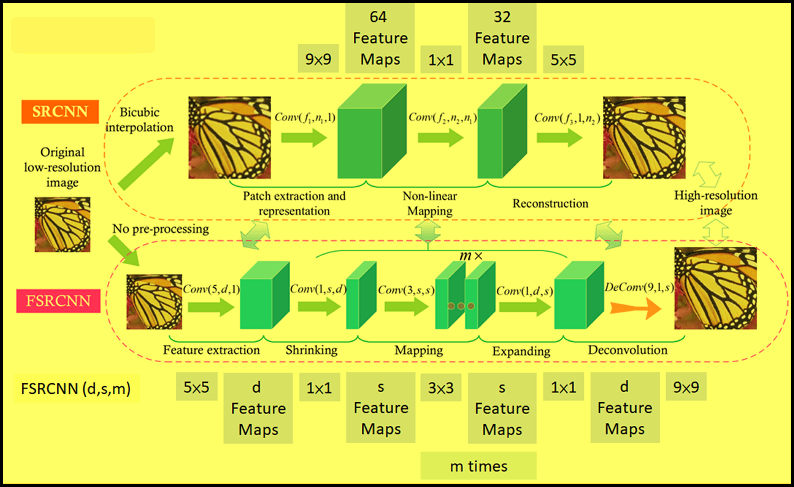 So, how does it work? SRCNN involves three primary points in its working. They are patch extraction/representation, non-linear mapping, and then reconstruction.

The three steps used above require mathematical equations like bicubic interpolations. We won’t be writing down the equations here, as you can read it online in much detail.

The key strength of this method is that the more samples it consumes, the better it becomes. That is why it is called self-learning AI.

For lower iterations, the results in SCRNN are most mediocre compared to bicubic, State of the Art, and Sparse Coding approach. But as the number of images for training increases, the conversion rate improves significantly.

For this reason, you can see that the AI Image Enlarger website has given a page to submit image samples for SCRNN.

Overall, this is one of the latest methods used for enhancing image resolutions. At a higher iteration, it is outweighing state of the art method in image enhancement.

The procedure is safe and secure. It helps in giving high-grade results for all types of images. With this, we conclude this short explanation for the methods used in AI Image Enlarger to convert images.

Now, we move towards learning the steps involved in image enlargement by this tool.

The Procedure of Using the AI Image Enlarger

Before we go in some depth about the process of conversion, we need to see the UI and how easy it is to operate. Does it require an experienced person to operate it?

Before beginning, you will need to see where we can access the tool. AI Image Enlarger is supported on both cloud platforms as well as on desktop mode.

Primarily, the program comes in the form of three types of subscriptions. It starts with a base free plan and then proceeds to pro and premium version.

The other versions have 99 and 999 conversion/month limit. However, these limits are noticeable mostly in the free version only.

Regardless, there is no trial version of AI Image Enlarger, but their lifetime free version saves the day for daily memers. After the installation of setup, users can jump straight into the setup and begin using it.

The setup is one of the minimalist image enhancers we’ve seen so far. Many of you might doubt its capabilities from the first look.

But you must test the functions it is designed for. The initial UI will simply ask for adding a photo for conversion. You can switch to your personal account if you have any subscription or go to the online converter.

On the main panel, AI Image Enlarger has multiple options to help choose the quality of conversion. The two selections are Image Style and Ratios.

As said above, users just need to drag and drop images into the panel and opt from the given choices to convert the image into.

The Image Style has options like artwork, photo, face, and high-grade. Most of these pic conversions are for fast conversion rates, making the entire process smooth.

The Ratio Tab recommends the users to pick a zoom ratio for the picture. As said, we get 2x, 4x, and 8x zoom feature. This means AI Image Enlarger has the top image enlargement techniques. 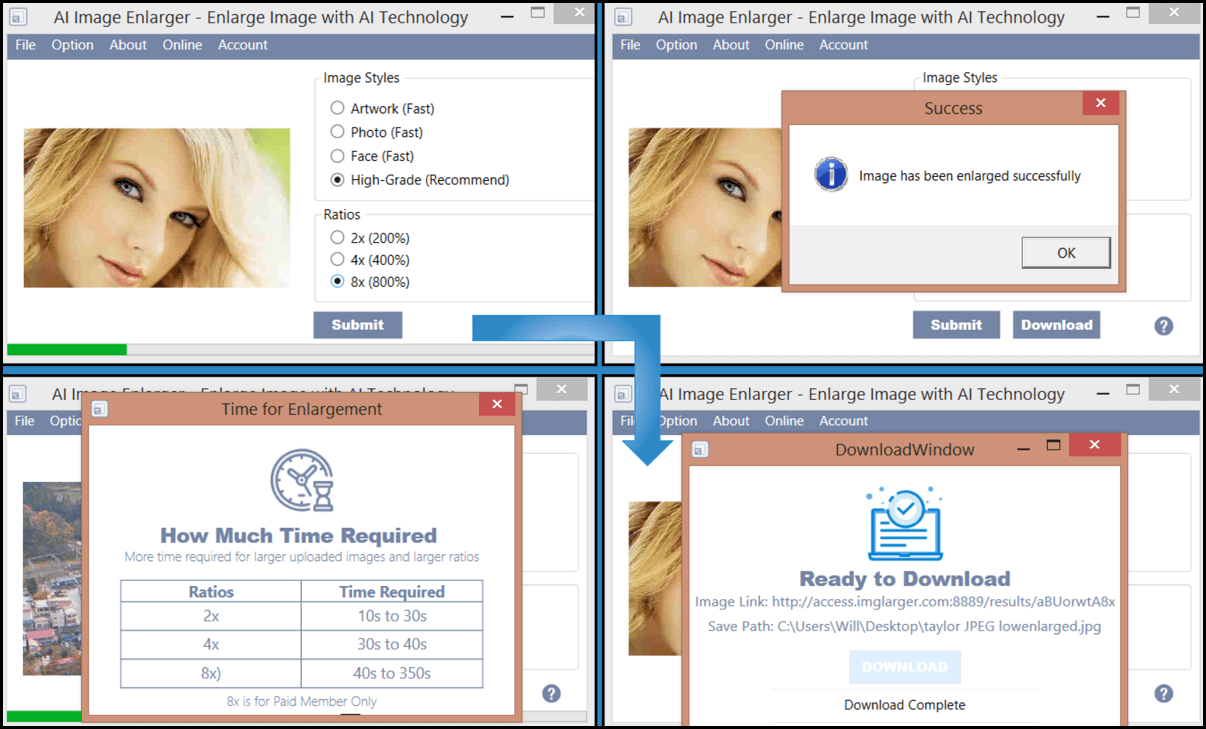 Be mindful that the images are enlarged in the sense that the content remains the same, except the AI manipulates the pixels to give a much smoother look when the picture is zoomed.

Now, take a blurry image from the stocks and drag it into this panel. Once the program has accepted the format, pick an image style and the zoom quality.

Hit the Submit Button. And then, it will upload and convert the images online. But wait, images larger than 1200 pixels cannot be added into the desktop version unless you have a paid account. So, another restriction for paid users!

Nevertheless, another thing we noticed is that they upload the image to their cloud server first and then convert it there. Once the file is converted on its server, we can download it.

This can be a nuisance for people who want offline operativity. Based on the type of photo you have uploaded, you can try to choose an image style. The best option is to use the High-Grade conversion style.

The conversion process is typically less than a minute or two. As soon as the image gets converted, a pop up will appear, and you can now download the image.

All in all, there is absolutely no requirement for you to have some prior knowledge of image editing or any of its terminologies. This is the best part of using AI Image Enlarger.

We conclude the primary and only procedure of enlarging images in AI Image Enlarger. As noticed, it is exceptionally novice-friendly.

Some Insight into what we Tested

Well, this is an image enlarger tool, so it is pretty obvious what we will be testing. But, for starters, the image enlarger is designed for all types of images.

We can quickly increase or decrease the resolution of a raw quality image. But to get better image resolution from a blurry low-resolution image is very tough.

For that, we took several low and medium quality image samples. The samples present had a variety of images like faces, arts, nature, objects, etc.

The best results we got so far where for faces. Even minor details around the face were corrected vehemently. The best results still required decent pic quality beforehand. 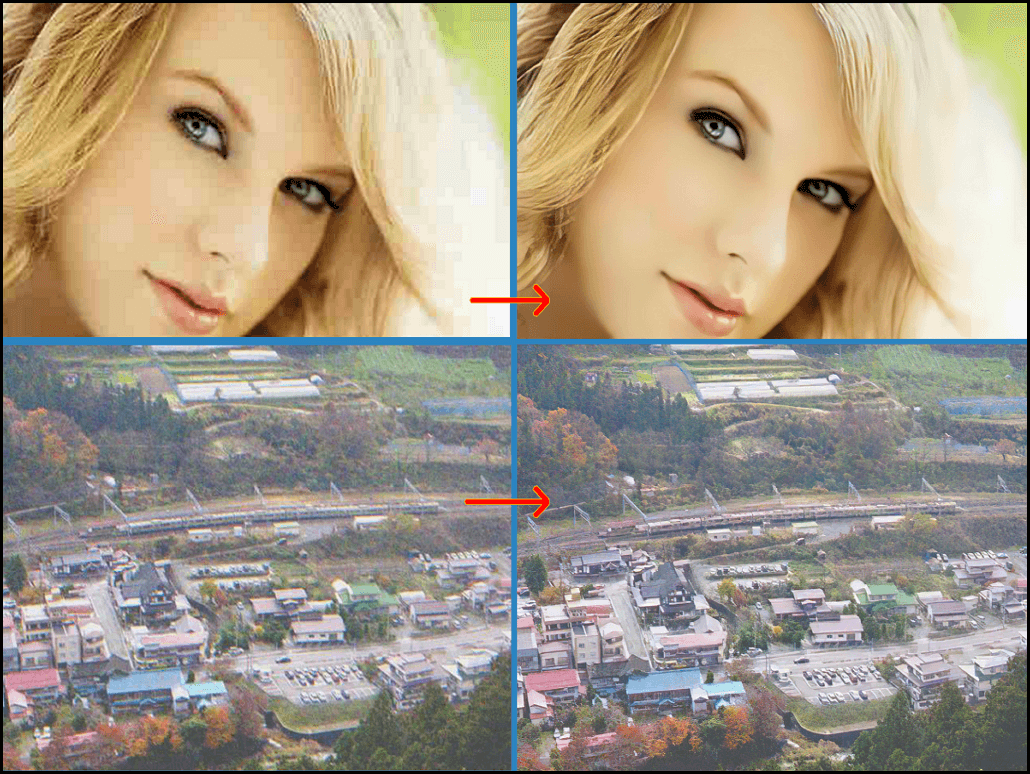 For urban areas and nature, we required to add the images multiple time comparatively. With each time, the quality improved overall.

Some of the things like old, low-quality CCTV images were also tested. The results were decent, to be honest. There were only a few things that needed improvement, and they were mostly in the UI part.

Every time we start AI Image Enhancer, the default save location changes back to the desktop. This must be averted, and the program must remember the previous location for saving files.

Another thing was the lack of cropping options before uploading the images. Also, if we can get an interface where we can get side by side preview of the enlarged and original version, it’ll be great. There must be a download button below this enlarged image panel itself. 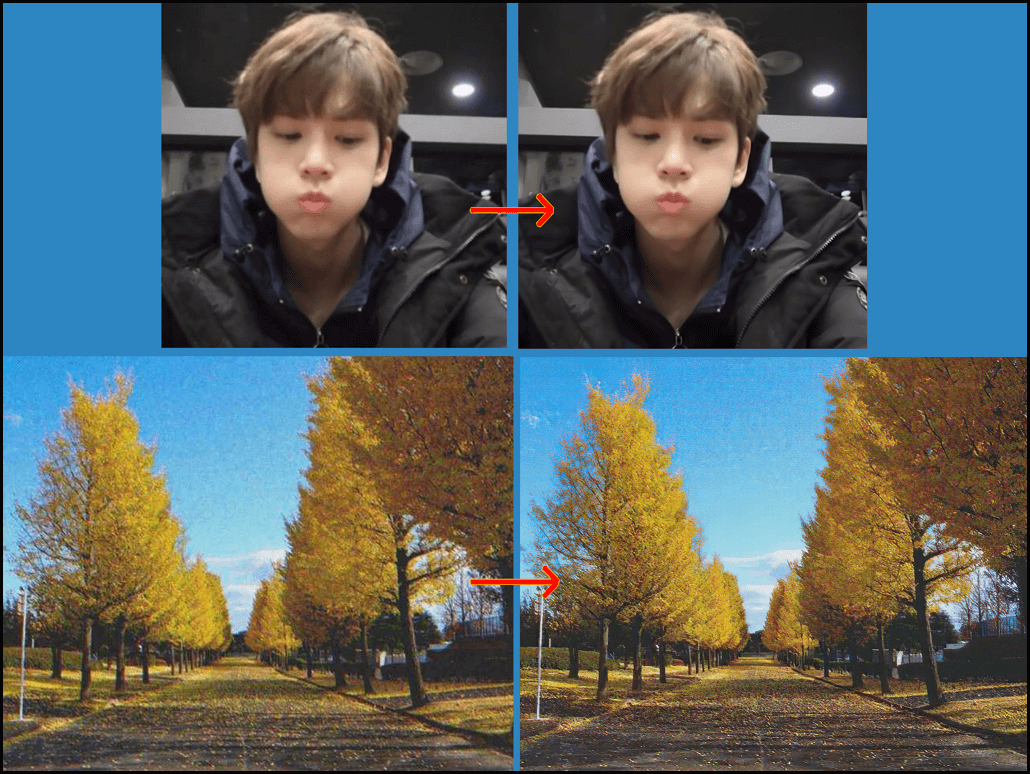 The product is still new, and so there are lots of things they will introduce in the later versions. Meanwhile, the conversion quality is still fantastic. As a test, you can try it yourself.

With an image converter, you can reduce the quality of an image and then test AI Image Enhancer. Images compressed more than 80% are usually ruined for good, and even this tool won’t revert their quality.

Even more complicated tools can’t recreate them as 360p quality, with pixels preserved. In our test, most images that were compressed above 50% but below 70% gathered better quality in the enlarging process.

All in all, for normal photos with somewhat viewable quality, it can be successfully enhanced and enlarged with AI Image Enlarger.

For worse quality, it is almost impossible to recover its quality, even at 360p scale. Although we fix it, many elements in the photos can’t be retrieved properly.

With this, we conclude the review of AI Image Enlarger by ImgLarger.com.

When it comes to quality comparison between AI Image Enlarger and tools like Photo Enlarger, Deep Image AI, and so; It offers a faster and efficient image enlargement and enhancement.

The UI can embrace some additional features that can make it a more advanced image enlarger. The other thing most people feel skeptical about is their company information. This makes some of the customers nervous before buying the product.

However, we had one of the pleasant encounters with the support staff and received a graceful response. Adding some more info about the company in the About section will remove this skepticism too.

The pricing plans are also parallel to other similar tools. All in all, AI Image Enlarger is one of the new tools in the market, and yet it offers much better conversion quality than other top products. Users can always try the free version to test the product, and we are pretty confident they’ll love it.